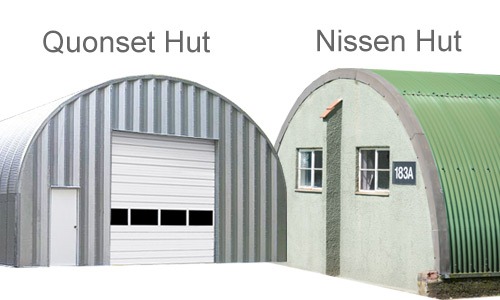 Nissen Huts are an arch-style steel building which was originally produced by the British during WWI.

It’s popularity quickly grew thanks to the efficient design utilizing horizontal internal support beams with corrugated metal sheeting overlaying them. This style of construction made it quick and affordable to set up wherever storage, living quarters, or other buildings were required.

These days Nissen Huts are typically more of a historical item and in the U.S. they’ve been replaced by an American style of arch building, Quonset Huts. Quonsets require no internal framing and are made of 100% steel.

Both the Nissen Hut and Quonset Huts are able to be easily sized for your needs. The beauty of a Quonset hut however is that it’s very easy to add additional arches and increase the length, while increasing the framing and sheet metal covering a Nissen Hut can be more difficult. Popular Uses and sizes for Hut style buildings include.

While both Nissen Huts and Quonset Huts are an arch-style steel building kit, their methods of construction are quite different. Nissens require the assembly of an interior frame made of wood or metal, then metal sheeting needs to be bolted on top. Quonsets have no interior frame and are as simple to build as bolting arch panels together.

Arch style steel quonsets are priced based on your needs & location. Please submit your requirements for a free no-obligation quote from a network of factories & building suppliers. 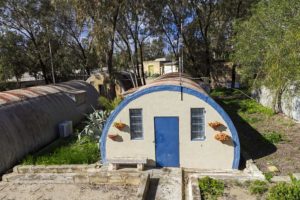 Nissen huts are prefabricated steel structures that were, and in some cases still, are used by the military for barracks. They are made from a skin of corrugated steel that is half-cylindrical. They were originally designed during World War I by Major Peter Norman Nissen who was an inventor and an engineer.

Major Peter Norman Nissen a member of the 29th Company Royal Engineers of the British Army experimented with hut designs. He was an inventor and a designer. He built three prototype huts that were cylindrical in nature. He got his idea from the Queen’s University, Kingston drill-shed. His fellow officers reviewed his design. Shelly, McDonald, and Sewell, who were all colonels as well as Clive Gerard Liddell a general helped Nissen with his design. Once a third prototype was developed the design was formalized and in August 1916, the Nissen hut went into production. During the First World War 100,000 were made. The invention was patented in the UK in 1916. Canada, the United States, Australia, and South Africa later took out patents. Nissen got his royalties from the UK government and not the huts that were made for the war. After the war that huts were sold and he got his money. He received around £13,000 and was awarded the Distinguished Service Order or DSO. There wasn’t a lot of them built between the wars but the construction ramped up again in 1939. The patent rights were waved for producing them for World War II. There were other huts built that were similar to the Nissen such as the Quonset Hut in the United States and the Romney hut in the UK. Thousands of the huts were massed produced. Nissen huts were used to accommodate soldiers, as bomb storage warehouses, and even as churches. Life in the huts wasn’t that great as they could get quite hot in the wartime theatres such as Africa and the Middle East. In Asia, the huts were often humid and stuffy. After WWII in the UK, many of the huts were used for industry or agricultural purposes. In Australia, they were used to house migrants. For post-war British families Nissen-Petren Ltd. Adapted the huts for use in construction camps and older huts were recycled into housing but its use for housing never gained popularity even though it was low cost. The reason for this is the lack of space in the hut and that it’s cylindrical in nature which makes the placement of furniture difficult. Magazines such as Popular Mechanics had articles on how to use the huts for other domestic uses such as storage shed for tools. 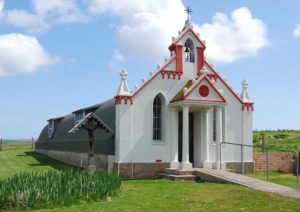 There were two main influences that went into the concept. There was a need for it to be economical in materials as there were shortages due to the war. The building also had to be easily taken down and portable since shipping space was at a premium. It could be constructed by six men in four hours and packed away in a wagon when necessary. The world record for the construction of a Nissen Hut is one hour and twenty-seven minutes.

The huts are made with sheet metal which is bent and then planted on the ground so the axis is horizontal. The cross section of the structure is not quite semi-circular and the hut bottom has a slight curve. The building exterior is made with curved corrugated steel sheets which measure 10 feet 6 inches by two feet two inches or 3.2 x 0.7 m. At the side is a two-corrugation lap and then the end has a 15 cm or six-inch overlap. There are three sheets which cover the arc of the hut. The sheets are attached by five wooden purlins which are 7.5 5 5 cm or 3 x 2 inch. At the end of the floor, joists are 3 x 2-inch wooden spiking plates. The purlins are attached to ribs. Each one of the ribs has three sections and splice plates are used to bolt them together. The ends of them are bolted to the floor. The rib has restraining wire on each side as well as a straining ratchet. A hook blot attaches the purlins to the ribs and this goes through a pre-drilled hole and secures to the purlin. The hook bolt is one of the unique features of the Nissen structure. In some cases, windows are added to the side of the building.

The great-grandson of Peter Nissen is bringing these huts back today and are being designed as garden huts. He has taken out a new patent to use the huts as eco-friendly garden areas for the increasing numbers of people working from home that want a garden or a home office area. They have the same shape as the originals and are covered with corrugated iron. They can be setup up without special skills. New huts run around £13,000. 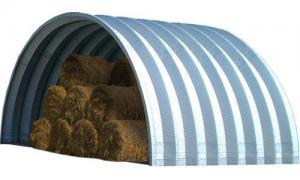 The Quonset hut was based on the design on the Nissen hut but produce in the United States and not in the UK. The name comes from where they were first designed which is at the Quonset Point at the Davisville Naval Construction Battalion Center which is in Davisville, Rhode Island. These huts were first manufactured in 1941 so they are not as old as the Nissen design. The United States Navy needed huts which were lightweight and all-purpose. They could be set-up without the need for specialized skills. The interior was quite flexible so it was used dental offices, medical facilities, latrines, barracks, housing, bakeries, and isolation wards. During WWII, around 150,000-170,000 were manufactured and the surplus was sold for public use after the war. Many of these huts can be found around the United States today and are used for homes, businesses, outbuildings and other uses. Some of the huts are still used on U.S. military bases.
Price a Quonset Hut for Your Needs
Request a Free Quote

Nissen huts have always stayed true to an arch-profile. Quonset huts on the other hand have evolved to come in a variety of shapes that are suitable for different needs. Below are a few of the most commong configurations available for quonsets.

Price a Building for Your Needs
Get a Free Quote