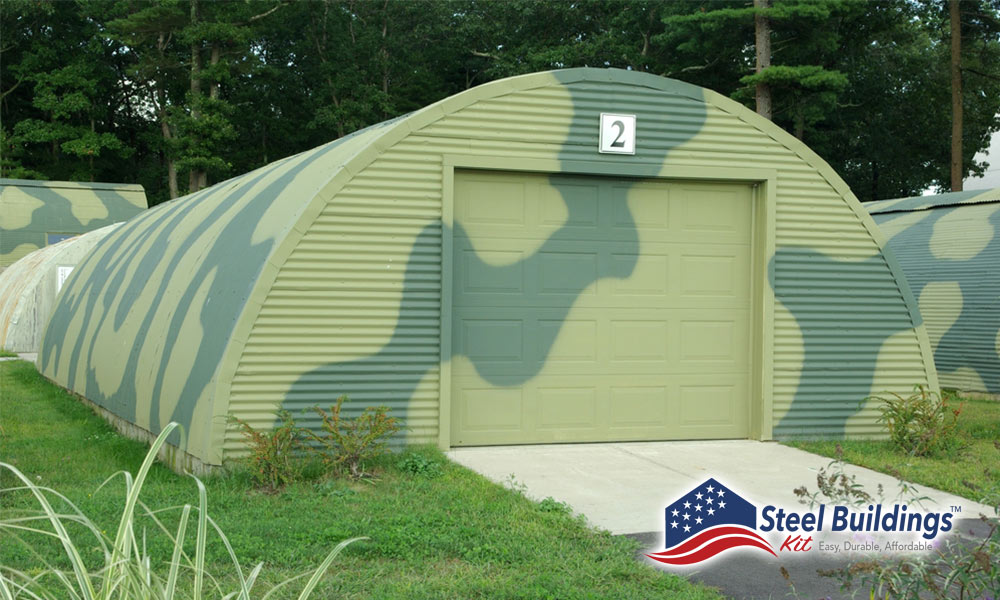 During wartime, there’s always an immediate need for all-purpose housing, as well as storage. The requirements for the Military were that housing and storage must be quickly assembled and disassembled in the field.

Along with considerations for the function of the building, there had to be the use of minimal equipment or tools to put everything together. It also assembles without skilled labor. It also meant that there had to be an ease of transport to the next location, i.e light-weight for ease of portability.

In order to meet the challenges and with World War II going on at the time, there had to be a suitable design that met the needs of the day. With the prevailing conditions of an ongoing war, it meant that the materials used, had to be durable as well. This then meant the use of metal, which provided reliable protection against the elements for both man and machine.

The prototype for a Quonset hut was crafted. In fact, it took a form similar to the British-designed semi-cylindrical Nissen Hut that was developed during WWI. The contractor – Dejongh and Brandenberger modified the British design into a metal structure that contained a wooden lining, insulation, and wooden flooring. To keep it lightweight, the use of surplus airplane material was used to cover the huts. The metal ribs were covered with sheets of corrugated steel.

Military Quonset Huts could be placed directly on the ground or a wooden sub-floor, as well as on pilings or even on concrete. The flexibility of the interior space was open as these buildings had to be used as medical spaces and isolation wards. The design provided for use as barracks, housing, and latrines as well. Of course, the materials used have evolved over the years as the original design used low-grade steel.

What are the Military Quonset Huts made of?

Usually, it is made of curved pieces of steel that are shipped as separate components then bolted together on-site. Originally the buildings would have been made of untreated steel. That was then replaced with galvanized steel. Today that has been replaced by a more rust-resistant metal such as galvalume which utilizes a specialized coating. You can also have the panels pre-painted from most factories.

The curve of the walls initially started at the floor, but this decreased the effective width of the hut. To fix this, a vertical four-foot-high side wall was created and a new vertical structural rib was developed.

You’ll find Quonset huts are still sold and have become popular for civilian use. The military also uses them in active duty.

The old huts of days past are still kicking around however and many of these Quonset Huts are used as homes, businesses or out-buildings. They were also used as temporary post-war housing for veterans and their families in California. Some are seen at some military museums to showcase World War II memorabilia, while others are still in active military use.

Military Quonset Huts then and now are still found to be:

These huts were classified as some of the most durable structures. Based on manufacturing specifications, the huts are able to withstand several climate extremes. Some huts are noted to easily withstand strong winds, hail and snowstorms, and even seismic activity events. It is also due to this adaptability, durability, and flexibility that they are popular.

If the military used these structures, that also meant that they are well tested and even considered all-purpose. This is so since military conditions at times are not the most ideal.

The Name? Comes from the place where the Military Huts were first manufactured on the site of Quonset Point on the Naval Construction Centre in Rhode Island.

If you’re interested in a Quonset hut for your building needs, we recommend you get free no-obligation quonset pricing here. These affordable buildings are an ideal solution for a wide variety of uses!

Buildings are engineered based on local building codes. Please provide a few details below for up to 3 free no-obligation quotes from building suppliers.